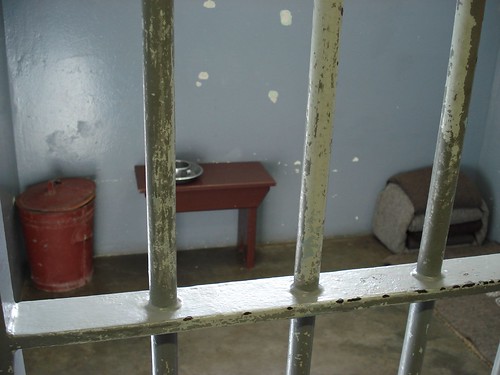 Nelson Mandela’s cell, a photo by azmiat on Flickr.

We visited Robben Island in 2006, and since Nelson Mandela’s death I have been thinking about his time in that cell, condemned to life behind bars, particularly since my own grandfather has been subjected to the same unjust treatment.

As a young man, he must have had many moments of despair. It would be difficult not to be bitter when looking back on the time he would never regain with his family and friends, but his philosophy was of looking forward instead of at past injustices.He even worked with his former oppressors to build a new South Africa based on freedom for all races.

This isn’t a blog about politics, but it is amazing to have seen something of Mandela’s life, as I don’t know of another person in the world who is so universally respected and admired. His long life is a testament to the dignity that comes from holding onto one’s principles.

You may also enjoy: